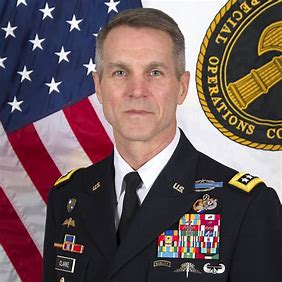 Prior to assuming command of USSOCOM, General Clarke served as Director for Strategic Plans and Policy (J5), Joint Staff, the Pentagon, Washington, D.C.

General Clarke’s other assignments as a general officer include: Deputy Commanding General for Operations, 10th Mountain Division from 2011 to 2013; the 74th Commandant of Cadets, United States Military Academy at West Point from 2013 to 2014; and the Commander of the 82nd Airborne Division.

His formative and key, Army and special operations, assignments include: Director of Operations, Joint Special Operations Command from 2009 to 2011. Eight years in the 75th Ranger Regiment first as a company commander, then as a battalion commander, and finally as the regimental commander. He also served as commander of 3rd Battalion, 504th Parachute Infantry Regiment, 82nd Airborne Division.

General Clarke has led Soldiers at all levels in Airborne, Ranger, Mechanized and Light Infantry units in five different divisions, the 173rd Airborne Brigade, and the 75th Ranger Regiment in the United States, Europe, Iraq and Afghanistan. His deployments while serving in the aforementioned positions include Operations Desert Shield and Desert Storm, Operation Joint Guardian in Macedonia, three deployments in support of Operation Enduring Freedom, four deployments in support of Operation Iraqi Freedom, and one deployment as the commander of the Combined Joint Forces Land Component Command - Operation Inherent Resolve.

General Clarke was born in Germany and raised in an Army family. He is a graduate of the United States Military Academy at West Point, NY, and was commissioned into the Infantry in 1984. He holds a Bachelor of Science degree from West Point and a Master of Business Administration from Benedictine College. He is a distinguished graduate of the National War College earning a master's degree in Security and Strategic Studies.

On Competition: Adapting to the Contemporary Strategic Environment